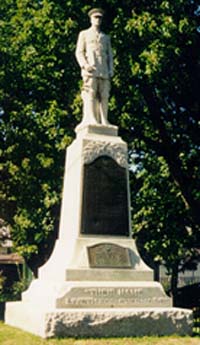 Constructed in 1920, in memory of the Soldiers Killed in the World War I.

The Monument was dedicated on July 6, 1921. The cost was met by public subscription. The cost of the statue, a Tait MacKenzie work, was paid for by the Glasgow family, in memory of Capt. Ernest J. Glasgow. The maintenance of the memorial is by the Morewood Memorial Association. In 1919, the Letters Patent was set up and financed by donations from the Chesterville Legion 434 and from other groups.

The contract was signed on March 17, 1919, by J.P. Laurin, Ottawa, Manufacturers of Artistic Memorials. The granite statue cost $3,000.

The members of The Morewood Memorial Association and the First Directors of the Corporation was Allan Smirle, William Bouck, Albert Glasgow, Ezra Countryman, and Hector Carruthers. 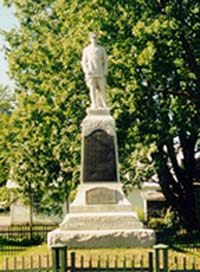 The name on the base front side reads: “Their Name Liveth For Evermore”.
Scroll to top